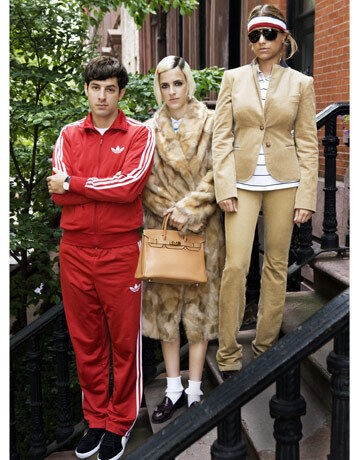 The Royal Ronsons in Harper's Bazaar

Ayman — August 18, 2008 — Fashion
References: harpersbazaar
Samantha Ronson and her siblings, Mark and Charlotte Ronson, are featured in the new issue of Harper’s Bazaar in a story called ‘The Royal Ronsons.’ The usually press-shy Ronsons channel the Tenenbaums and open up about their upbringing.

The three siblings are captured by Jenny Gage and Tom Betterton. They pose as Chas, Margot, and Richie Tenenbaum from the 2001 cult favorite, “The Royal Tenenbaums.”

Apart from the photoshoot, the Ronsons have something else in common with the Tenenbaums: they are both products of an unusual upbringing and artistic environment.

“It would appear that we had a bohemian, rock ‘n’ roll upbringing,” says Charlotte. “And in many ways it was, but our mother was superstrict, and we also had the very English, proper nanny.”

It seems that their artistic and unusual upbringing has paid off. Mark has won three Grammy awards for his work on Amy Winehouse’s ‘Back to Black’ album, and his own album, ‘Version,’ went double Platinum in the UK.

Samantha is a pretty famous celebrity DJ who is working on her own band. She also is the center of a media bonanza about a possible relationship with Lindsay Lohan.

Charlotte is a fashionista who counts Kate Moss as a fan of her style, and is working on her own fashion label.

Harper’s Bazaar has been very creative in this latest issue. Check out more content below.
2.2
Score
Popularity
Activity
Freshness