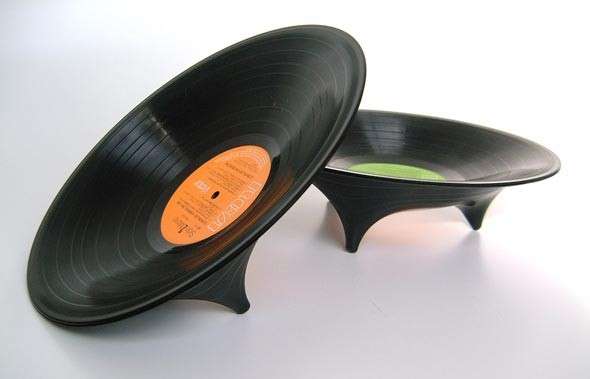 Design Crack — February 28, 2007 — Eco
References: endavid.nl & designcrack
Share on Facebook Share on Twitter Share on LinkedIn Share on Pinterest
Yesterday, a guy from the Netherlands left a comment on my blog announcing that he had this vase that I had profiled a while back for sale on his site. The piece he pointed out to me was this fabulous Tulip vase by Lotte van Laatum which sells for about $140. So, I went to check it out, and it turns out he had several really great pieces for sale on his site. One of which was this record bowl. In college here in the U.S., I think it's standard practice for a student who is a creative type to make a record bowl. All you do is get out a pretty powerful, full heat hair dryer and blast the record with hot air as you slowly press the record into a ceramic bowl. What you come out with is an oddly shaped weird looking record bowl. This bowl I'm featuring is so much more refined than that. It's made of two bowls fused at the edges. The top record has a subtle and slight curve while the bottom record has three small, space-age legs popping out. I'm asking for one of these for my birthday, for sure.
3.7
Score
Popularity
Activity
Freshness
Attend Future Festival