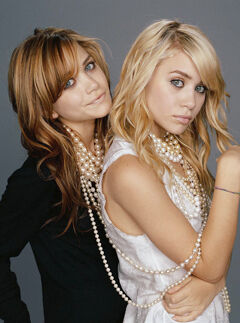 Twins Move From Walmart To The Row

Bianca — August 24, 2007 — Lifestyle
References: nymag
Share on Facebook Share on Twitter Share on LinkedIn Share on Pinterest
The former child-stars, Mary-Kate and Ashley Olsen, are finally ready to grow up, and it's reflecting in their work. The 21-year old twins are huge fashion icons, their unique styles copied by girls -- and women -- worldwide. They had their own line of clothes which, until very recently, was limited to a tween brand sold exclusively at Walmart. Fortunately, they're finally embracing their young adulthood and are shifting from being a cute child star duo, to being sophisticated, trendsetting young women. Row, their new line, is "a line far moe about who they're becoming as adults than who they've been, in the eyes of the world, for such a long time," said New York Magazine.

The sisters are no longer attached at the hip either, and are leading separate lives -- they even prefer to do their interviews solos. Ever since they enrolled for courses at NYU, they began to establish their own identities. Ashely studied architecture, and Mark-Kate pursued photography. "But where they met then, and still meet now, is at fashion."

"They experiment with proportion and silhouette. They mix vintage and new, labels and non. They've raised accessorizing to a form of high, glamorous art. If the Olsens' style resembles anyone at all, it's not Lindsay Lohan or Mandy Moore or any of their other presumptive peersâ€”they dress like sittings editors at French Vogue."

The girls have developed a taste for higher end wardrobes -- and no wonder -- they attend all the major fashion shows in the big cities where they sit front and center. Designers send them heaps of free clothes. Oh yeah, and they can afford to buy whatever they want!

Despite being exposed to the same looks that infest the pages of Vogue, the girls have still managed to develop their own personal style, unlike many other celebrities who steal the looks directly from the runway.
5.6
Score
Popularity
Activity
Freshness
Get Trend Hunter Dashboard

30 Olsen-Made Looks
Olivier Sarkozy and Mary-Kate are Controversial, But She's a Talented Designer