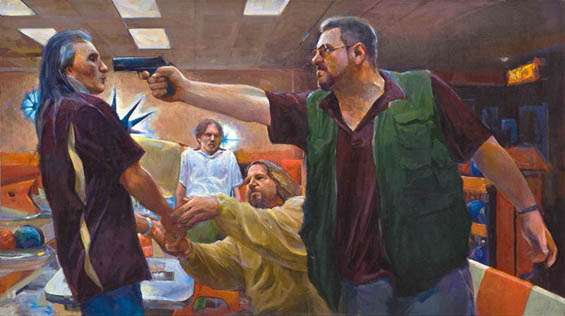 Joe Forkan's 'The Lebowski Cycle' Creates Art out of a Classic

The Coen Brothers' directed Big Lebowski was released in 1998 and considered a box office disappointment when it topped out at $27 million internationally. Within a few short years, however, the movie emerged as a cult classic, spawning festivals across the United States dedicated to celebrating the film's impact, and even a religion based on the principles and philosophies of the film's protagonist, the Dude.

In Forkan's 'The Lebowski Cycle,' we see some of the films most memorable scenes illustrated through deft paint strokes. 'The Lebowski Cycle' works as an effective tribute to the film by offering impressively detailed illustrations. John Goodman, Jeff Bridges, and Steve Buschemi are easily recognizable as their characters, and it's hard to not imagine the movie scene when you view each piece.

If you're a fan of the film (and even if you're not), this is a must see.
5.6
Score
Popularity
Activity
Freshness
View Innovation Webinars