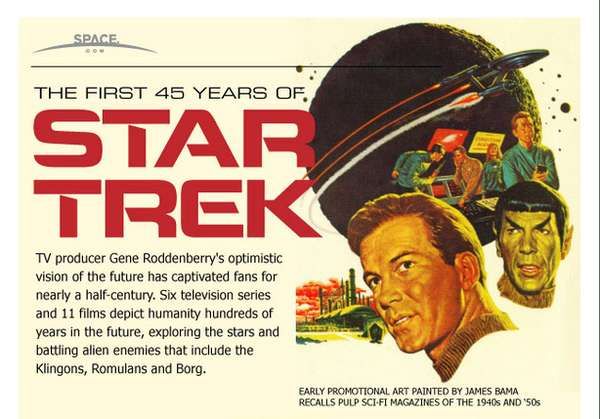 'The Evolution of Star Trek' Infographic Explains the Progres

Erin Kirkpatrick — August 27, 2012 — Pop Culture
References: space
Share on Facebook Share on Twitter Share on LinkedIn Share on Pinterest
Avid Star Trek fans will be flocking to 'The Evolution of Star Trek' Infographic to confirm their carefully self-constructed timelines. For nearly a half century, Star Trek has captivated the attention and the imaginations of individuals worldwide. Gene Roddenbury, the visionary producer who helped complete six television series and 11 film depictions, has successfully transported minds throughout the universe and beyond.

This graphic, which is set up like a timeline, examines film that sets the stage for the Star Trek franchise, iconic moments in the area of real space exploration and the first ever Star Trek convention. It also explores the specific episode occurrences of particular characters including the Romulans and Klingons.

Covering Star Trek-oriented events that span from the introduction of 'Forbidden Planet' in 1956 to the upcoming 2013 release of the J.J Abrams' next Star Trek installment, The Evolution of Star Trek Infographic is jam-packed with sci-fi schooling.