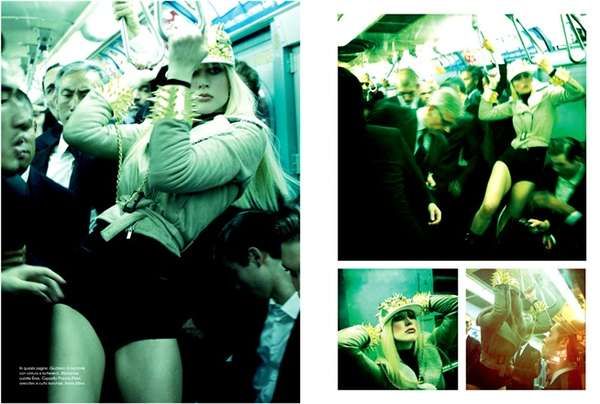 Meghan Young — November 1, 2011 — Fashion
References: vogue.it & fashiongonerogue
Share on Facebook Share on Twitter Share on LinkedIn Share on Pinterest
The A Train photo spread truly captures the gritty, glamorous and oh so eccentric vibe of the New York City subway system. Aside from the dark and dingy setting, model Raquel Zimmermann manages to portray all the eclectic characters one is bound to meet during a normal train ride in the Big Apple.

Shot by Steven Meisel for Vogue Italia’s November issue, the A Train magazine spread really chose a fantastic venue to show off stylist Carlyne Cerf de Dudzeele's chops. Turning Zimmermann into a veritable chameleon, Dudzeele pulled extravagant pieces from fashion houses such as Alberta Ferretti, Salvatore Ferragamo, Bottega Veneta, Dior, Emporio Armani and others. Even though each look is as different as the next, the A Train spread pulls it all together beautifully. What a great concept for a fun shoot.
6
Score
Popularity
Activity
Freshness
Get the 2023 Trend Report FREE