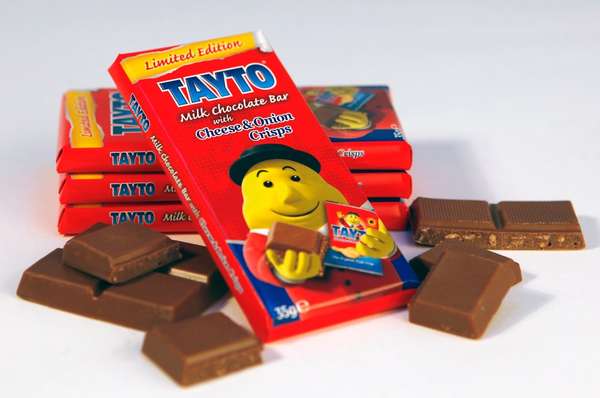 The Tayto Cheese & Onion Chocolate Bar is a Controversial Mix

Meghan Young — May 6, 2013 — Lifestyle
References: facebook & neatorama
Share on Facebook Share on Twitter Share on LinkedIn Share on Pinterest
The Tayto Cheese & Onion Chocolate Bar seems like too strange of a pairing to be real. But April's Fool Day is long gone, so there really is no good reason for such a spoof. The major Irish crisps and popcorn manufacturer, which was founded by Joe Murphy in 1954, created a limited run of the treat. It was met with much enthusiasm. Taste Ireland CEO Eamon Eastwood says, "I couldn't believe the reaction, it went off the richter scale with almost half a million impressions."

It might be a controversial mix, but the Tayto Cheese & Onion Chocolate Bar appears to have won over the hearts of the Irish people. Mr Tayto himself wrote on Facebook, "They said it couldn't be done, but you know how much I love a challenge."
3.1
Score
Popularity
Activity
Freshness
View Innovation Webinars