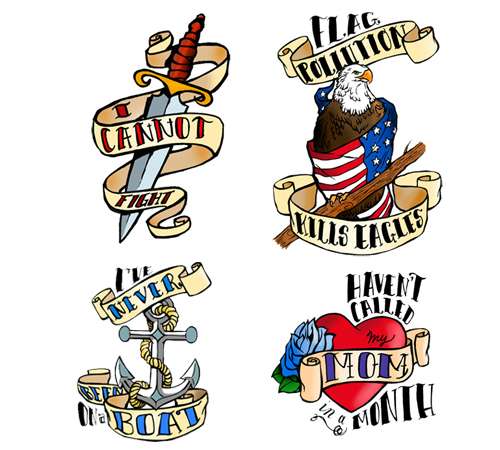 Tattoos of Truth by 'You & Me, The Royal We' Tells it Like it Is

Matt Ho — August 12, 2011 — Pop Culture
References: youandmetheroyalwe & heartymagazine
Among the many parodies of body ink, the Tattoos of Truth by Brooklyn design trio 'You & Me, The Royal We' is probably one of the funniest I've seen.

Tattoos of Truth exposes the truths of some of the most common ink work you'd see from traditional Americana style. For example, normally an image of a dagger or an eagle implies power and the meaning of pride behind it. But since some people tend to get inked for the sake of looking cool, You & Me, The Royal We decides to parody those individuals with messages behind the actual meaning of the tattoo. It's a very clever idea and concept that hilariously parodies stereotypical artwork and the truths behind it.
3.6
Score
Popularity
Activity
Freshness