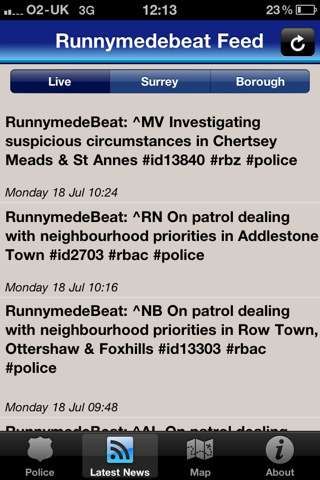 The Surrey Police App Tracks the Movements of Local Cops

The police forces of Surrey, South East England have released a free application that provides live updates on the activities and locations of on-duty officers. Using the Surrey Police app, iPhone owners can call for assistance or even vote on which townships require the most frequent patrols. While the app's original purpose was to inform citizens about local crimes and the subsequent police responses, it will undoubtedly find favor among malefactors.

Imagine knowing in advance where the local police officers were, where they were headed and what they were occupied with. Armed with that information, an unsavory character could do anything and get away scot-free! Instead of being used to incite more riots, let's hope this app is used properly by the county folk.
0.5
Score
Popularity
Activity
Freshness
Get Better and Faster

Anti-Assault Protests
SlutWalks are a Response to Attitudes About Rape