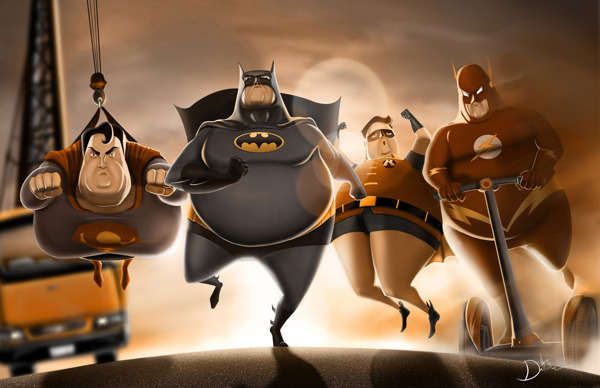 Paul Maccarone — July 10, 2013 — Pop Culture
References: designtaxi
Share on Facebook Share on Twitter Share on LinkedIn Share on Pinterest
Not even superheroes are able to stay in great shape anymore! At least, according to illustrator Carlos Dattoli's work entitled 'Fat Superheroes' that is. The image shows Superman, Batman, Robin and the Flash racing toward something with their brand new plus-sized costumes complete with protruding paunches leading the way.

While it's definitely a hilarious adaptation of these well-known superheroes, it certainly does raise some current concerns. With America continuing to gain a reputation for being a somewhat heavyset nation, is this portrayal of these superheroes really that implausible? I mean, the Flash isn't even running anymore, he's flying around on his own Segway and Superman is using a crane to fly! All jokes aside, Dattoli's 'Fat Superheroes' is a cleverly done illustration that speaks of a wildly creative imagination.
5.6
Score
Popularity
Activity
Freshness
View Innovation Webinars