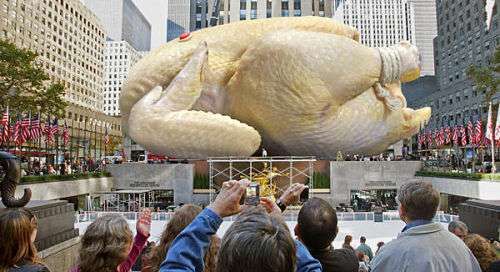 OK, so it is clearly another awesome spoof ‘news’ piece from the Onion, but I love it.

Brilliantly they claim it is a nationally televised event that begins when workers prop open the skin flaps of the 55-foot-tall bird and push an 11-ton mixture of bread crumbs, onions, and other fixings into its massive cavity.

Some people are fooled by the Onion news at times, but surely this statement will clear up any confusion:

"Officials claimed that the turkey would not be wasted this year, as its leftovers will be used to make enough sandwiches to last for the next 10 months."
1.4
Score
Popularity
Activity
Freshness
Attend Future Festival