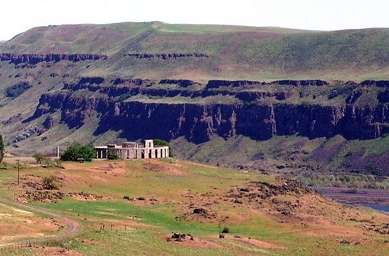 Katie Cordrey — January 26, 2009 — Art & Design
References: bbc
Share on Facebook Share on Twitter Share on LinkedIn Share on Pinterest
Stonehenge at Maryhill, Washington is the first World War I war memorial erected in the United States. It’s also the first U.S. replica of Stonehenge. The builder, Sam Hill, believed that the original Stonehenge had been used as a sacrificial site and wanted to remind visitors that “humanity is still being sacrificed to the god of war.”

It is located on a bluff high above the Columbia River near Biggs, Washington. Opinions of the reinforced concrete replica range from “super tacky” to “amazing.” Weddings, Wiccan celebrations and the Hells Angels’ annual gathering are held there. Because it is in the heart of wine country and located inside the boundaries Columbia Gorge Scenic Area, it is a frequently-visited tourist attraction.

On the BBC Wiltshire site are photos of Stonehenge wannabes. In Texas, where they like to do things bigger than everyone else, there are two. Santa Fe has Frigehenge. Nebraska has Carhenge. Foamhenge is in Virginia. Athens Georgia, New Zealand and Australia have also had a go at reinterpretation.

It’s good to know we Americans aren’t alone in this.
1.8
Score
Popularity
Activity
Freshness
Get the 2021 Trend Report FREE