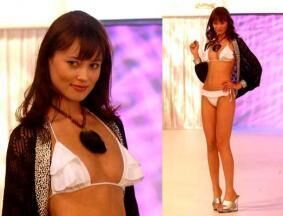 Excerpt From Giz Magazine:
May 10, 2006 The Electric Cinderella shoes idea began as part of Simona Brusa Pasque's thesis at the Interaction Design Institute in 2002 and was inspired by a beautiful woman who Simona interviewed for her thesis who wanted to be able to â€œintimidate her intimidators.â€ She wanted to be empowered without losing her femininity, to have the freedom to be sexy without fear. The shoes certainly achieve that, offering 100,000 volts of high fashion stun gun power which can be activated by a control on the matching necklace. The weapon is hidden and when the wearer taps on the matching necklace an electric spark is displayed in the transparent tip, warning the would-be assailant to back off. The weapon is designed for a one time use, in case of emergency, by breaking the tip of the shoe. The shoes have now evolved through several prototypes with earlier versions exhibited at SIGGRAPH 2005 in Los Angeles, at Nemo Museum, Amsterdam, and at Pica Museum in Perth, Australia with the latest incarnation getting its debut outing at the recent CTIA Wireless Fashion Show in Las Vegas. â€œI believe this type of capability is a dream of many women and it is my intention to bring it to market,â€ Simona told Gizmag. Simona is seeking "the right business partners."
6
Score
Popularity
Activity
Freshness
Attend Future Festival