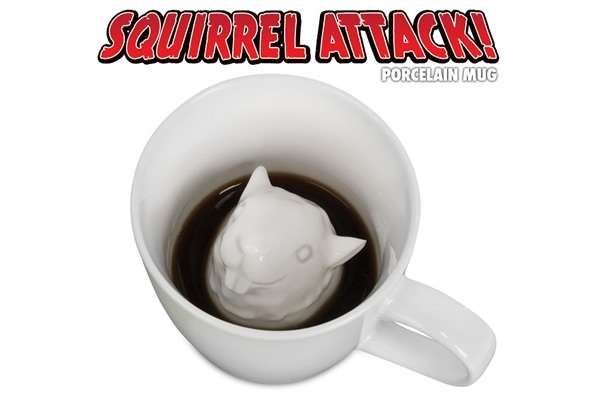 The Squirrel Attack Mug Give Coffee Drinkers an Unexpected Surprise

Erin Kirkpatrick — July 19, 2012 — Lifestyle
References: neatoshop
Share on Facebook Share on Twitter Share on LinkedIn Share on Pinterest
Anyone who loves surprises and unexpected events in the morning will truly appreciate the Squirrel Attack Mug. While coffee drinkers unsuspectingly sip their morning coffee of this seemingly ordinary white mug, a secret lurks at its bottom: an angry squirrel. This is no ordinary squirrel, but in fact an attacking squirrel -- bared teeth and all -- ready to pounce on unarmed civilians at the breakfast table.

At first, the squirrel goes unnoticed, but as the liquid levels in your mug deplete and recede, individuals will catch a glimpse of this vicious and bloodthirsty forest-dwelling creature. Perfectly posed for a surprise attack to the jugular, the Squirrel Attack Mug is sure to scare individuals to attention, in effect waking them up faster than their morning caffeinated binges.
2.1
Score
Popularity
Activity
Freshness
Get Trend Hunter Dashboard