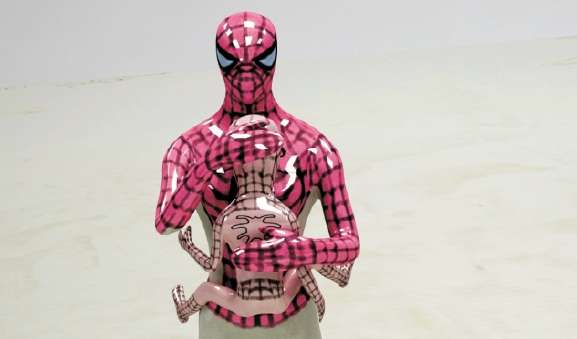 The 'Spider-Man Baptism' by Tomas Marussiac Explores Themes of Intimacy

tomas marussiac — November 15, 2011 — Naughty
References: marussiac.cultcode
Share on Facebook Share on Twitter Share on LinkedIn Share on Pinterest
Tomas Marussiac continues its recent series of 'Spider-Man Baptism.' Spider-Man is a hero who hides his identity to the world, therefore, the series raises the question of who spiderman is and what his secret life entails. Spider-Man, Superman and Batman are all 20th century mythological legends. Mythological heroes of ancient Greece also had its negative face, such as Hercules who killed his family. So people do not create only positive characters because most mythological heroes can have a dark side.

Secret Handbook is a guide to create another form of mythology Spiderm-Man. Life as Spiderman is shown as a child's game (playing with toys is typical for Marussiac as a metaphor for the real world). Spider-Man reveals his identity: Peter Parker. Spiderman also reveals his own sexual intimacy. The female Spider-Man woman may be pregnant and she can give birth to the new Spiderman. Both can live their private lives. A series of prints are available for download and impress. All prints are created in super large postcards, which the viewer can send via mail.
3.4
Score
Popularity
Activity
Freshness
Get Trend Hunter Dashboard