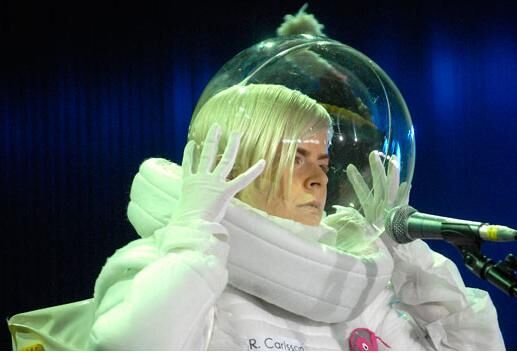 Bianca — May 12, 2008 — Pop Culture
References: robyn & catwalkqueen
Share on Facebook Share on Twitter Share on LinkedIn Share on Pinterest
We've covered futuristic fashion before, and while we've touched on the galactic fascination numerous times, never has it been more clear that luxury space travel is a huge part of the inspiration. Just look: Robyn is wearing a spaceman helmet.

Will pushing her wardrobe to extremes help with her comeback? The Swedish singer sported the space suit at the Radio 1 Big Weekend concert, but fortunately took it off shortly getting on stage.

The verdict? Silly costume but she fittingly put on an out of this world performance.

"Robyn was known in the late nineties for her dance-pop hits 'Show Me Love' and 'Do You Know (What it Takes),'" says Wikipedia. "Robyn entered Melodifestivalen 1997 as songwriter to the entry 'Du gÃ¶r mig hel igen'. She has since started to gain mainstream success worldwide owing to the popularity of her single 'With Every Heartbeat' and subsequent album release. She did a demo for Britney Spears' Piece Of ME and when Britney heard it, she liked it so much she left some of Robyn's vocals on the final version."
1.7
Score
Popularity
Activity
Freshness
Access Advisory Services