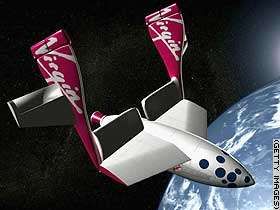 The shuttle and the international space station continued this record of dismal return on investment. Small wonder, then, that most private-sector investors have focused instead on more earthly pursuits. Only one thing will prod us into the cold, hard vacuum of space, and that's the prospect of earning cold, hard cash.

We are also well into the commercial space age. In 1998, private-sector spending on space applications began to exceed government spending, and the gap is widening. A critical mass of entrepreneurs -- some with familiar names like Bezos and Branson -- have been backing space-related companies for years. In the coming months, their efforts will reach blastoff stage (quite literally). Some of the markets they're targeting, like the $4 billion satellite launch business being pursued by PayPal founder Elon Musk, are ripe for competition. But most, such as suborbital tourism, space hotels, and solar satellites, don't yet exist. All, however, have the potential to generate astronomical returns during the next decade.
3.3
Score
Popularity
Activity
Freshness
Get Trend Hunter Dashboard