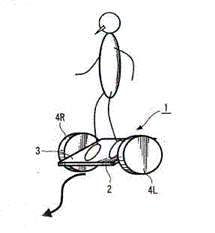 Irishgirl — February 3, 2007 — Tech
References: tinyurl
Sony's latest invention seems to be a revolutionary development in transport. It is aimed to compete with the Segway which was first shown to us in 2001. This is the latest perhaps greatest electronic transport. It is currently the only vehicle which can be controlled by just an incline of the rider in their desired direction in relation to the center of gravity. It looks like a cross between the Segway and a skateboard. This is just the patent and as of yet there is no news of when it will be available or how much it will cost. Other variations for this technology including a bicycle type model and a two-boarded type, with one for each foot.

The board consists of four pressure sensors, one at each corner. When the rider stands upright the sensors return the same reading and the board remains immobile. If the rider wants to move forward all s/he has to do is lean forward and the front sensors start both motors running forward at the same speed. If the rider wishes to go left of right they have simply to lean in that direction, also if they wish to go backward the same is applicable.

This is a very exciting breakthrough in transport and it appears that Sony may just have gotten it very right with what appears to be a revolutionary step in the future of transport.