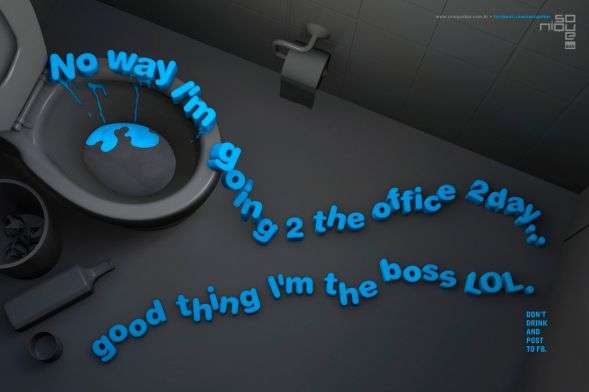 Recommending that people don't text, tweet or post on Facebook with alcohol in their systems, this Brazilian lounge is most likely attempting to deliver a completely different message. By name-dropping means of pop culture information sharing through websites like Twitter, the establishment could simply be trying to appeal to a young and Internet-savvy crowd from which to acquire clientele.

Under the art direction of Dentsu, these prints paint a picture of a park bench, a domestic couch and a bathroom. In every case and amidst broken bottles and spilled neon liquid, the Sonique Bar campaign spells out statements that one should not post online. Perhaps they are familiar to your News Feed?
3.8
Score
Popularity
Activity
Freshness
Jeremy Gutsche Keynote Speaker