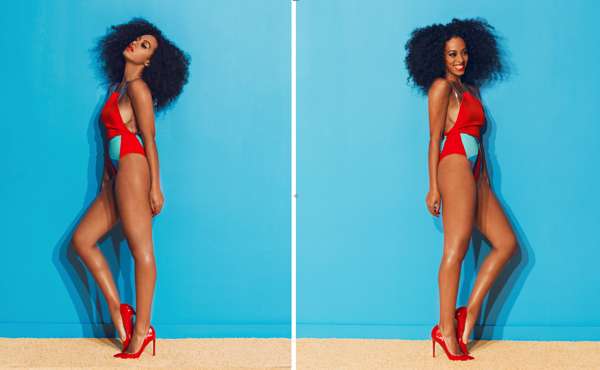 Jordan Sowunmi — May 20, 2013 — Pop Culture
References: complexmag & behance.net
Share on Facebook Share on Twitter Share on LinkedIn Share on Pinterest
It's hard to escape the shadow of a peer when that peer is your superstar sister, but the Solange Knowles Complex June/July 2013 cover story and editorial illustrate that the 26-year-old Texas native has enough poise, star power and style to be examined as a notable talent in her own right.

The Solange Knowles Complex June/July 2013 editorial was shot by vaunted collaborative photography duo JUCO, and capitalizes on Solange's ascent to the top of of the mainstream heap, which began last year when she released the spellbinding hit, 'Losing You.'

The poses, color blocking, and sex appeal in the Solange Knowles Complex editorial are staggering. Already a favorite of fashion luminaries like Roberto Cavalli and Giorgio Armani, Solange displays the confidence and poise of a veteran supermodel. She's alternates between coy, coquettish and assured facial expressions with ease.

If the Solange Knowles Complex June/July 2013 editorial is any indication, we're witnessing the rapid development of yet another multi-faceted fashion, music and art empire from a member of the Knowles family.
4.6
Score
Popularity
Activity
Freshness
Attend Future Festival