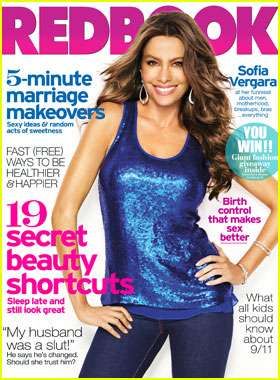 Souzan Michael — August 9, 2011 — Pop Culture
References: stylenews.peoplestylewatch & justjared.buzznet
Share on Facebook Share on Twitter Share on LinkedIn Share on Pinterest
It's no secret that Sofia Vergara is hot; from her sultry Colombian accent to her perfect hourglass shape, the woman oozes with sex appeal and the Sofia Vergara Redbook September 2011 cover certainly shows that off. And yet, while women all over the world may be tempted to hate her due to her nearly flawless looks, the 'Modern Family' actress makes that impossible -- she also happens to be hilarious.

Donning comfortable jeans and a sparkly blue top, the Colombian beauty shares in the magazine, "I’ve had these ridiculously huge boobs since I was super young. Like, 13." She continues, “I was really skinny at the time, so it was weird to have those boobs and be skinny. It was hideous. Then after I had my kid, I got hips and everything started to come together."