50 Gifts for Coworkers
Next
Set of
Related
Ideas 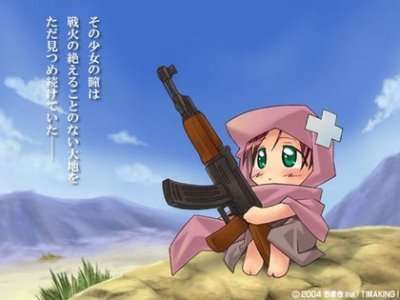 In the 26-part sociopolitical manga series, Middle Eastern countries are represented by female characters with personality traits resemblant of each location.

"We meet needy Pakisu-tan, sleepy-eyed Turkmenis-tan and of course Afuganisu-tan - represented as a clumsy little girl who is trying ever so hard to stand up for herself in a very tough neighborhood," Inventor Spot says. Little Agufanisu-tan has to deal with bullying from these older, stronger neighbours. Meriken is one of the more aggressive characters that enters the plot.

"As we enter the modern era, Afugan (for short) is forced to leave her home, which is then occupied by a group of stray cats - Al Qaida. To quote the text, 'The boss of the stray cats that settled in Afugan's house, was really hated by Meriken.'"

Manga is a powerful medium in Japan, and Timaking saw moe anthropomorphism as an innovative way to cover sociopolitical issues.

There seems to be an interest in manga as an educational or awareness medium. Will the west begin to embrace manga as a credible information source and learning tool?

A few weeks ago we featured a business manga book by Dan Pink which is promising to be a wild success.