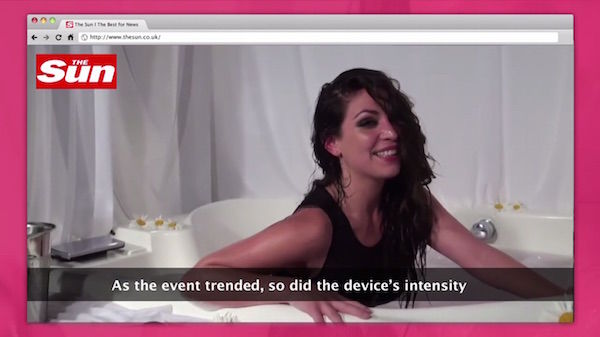 Meghan Young — May 13, 2016 — Naughty
References: twitter & designtaxi
It might seem as though adult toys sell themselves, but this social orgasm experiment shows that anything can benefit from some clever marketing tactics. In this case, the climax of a social orgasm is not only clever, but perhaps a little controversial as well. Of course, what's a good campaign without a little controversy?

Created for the Chile-based sex shop JapiJane by ad agency BBDO Chile, the social orgasm experiment was meant to illustrate the fact that women have a harder time reaching such a climax, yet the use of sex toys can elevate such an intimate experience between couples. Essentially, the use of a hashtag affected the intensity of a sex toy used by a woman, who was broadcasted live as she reached her "social orgasm."
6.7
Score
Popularity
Activity
Freshness