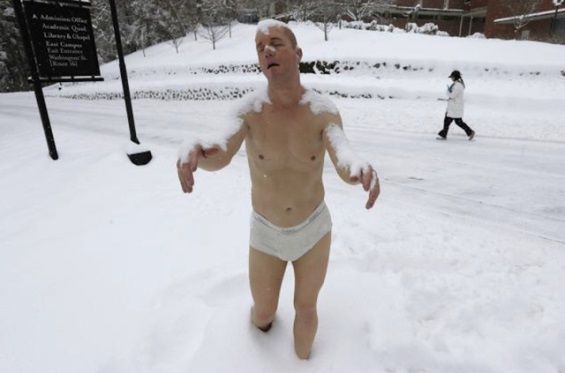 Sleepwalker by Tony Matelli Creeps Out Students at Wellesley College

Meghan Young — February 12, 2014 — Art & Design
References: tonymatelli & beautifuldecay
Share on Facebook Share on Twitter Share on LinkedIn Share on Pinterest
Sleepwalker by Tony Matelli, an artist born in Chicago, Illinois, and based in New York City, is a sculpture that has received a lot of controversial attention. Installed outside of the Davis Musuem at Wellesley College in Massachusetts, it depicts a nearly naked man sleepwalking outdoors hence its name. Extremely realistic, it has caused some students, headed by junior Zoe Magdid, to feel unsafe on campus.

Although Sleepwalker by Tony Matelli does depict a rather creepy sight, it is hard to imagine how it would trigger such heinous crimes. Instead, it is more like a Halloween installation that was simply put up eight months in advance. Other than its less than stellar reception, the sculpture does encourage people to dwell on concepts of displacement and vulnerability.
1.3
Score
Popularity
Activity
Freshness
Get the 2023 Trend Report FREE