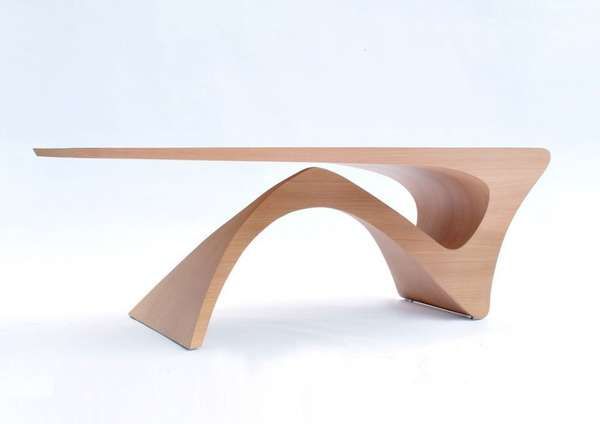 Frank Luanda — June 25, 2012 — Art & Design
References: daanmulder.eu & contemporist
Share on Facebook Share on Twitter Share on LinkedIn Share on Pinterest
As part of his Form Follows Function series, Dutch designer Daan Mulden has released a table that is more of a standout piece than complementary. The name is a little contradictory, as form clearly takes priority over function in this series. Much like the sofa released in December 2011, the table is without moving parts. It is constructed by laminating several layers of wood that are finished in a lusty oak veneer and then painted in an ultra matte lacquer.

An interior architect by profession, Mulder handles projects for businesses, homes and public spaces. He believes that interior spaces "reflect the identity of the individual" and thus prefers to take his clients' personal tastes and experiences into consideration during the redesigning process. That, combined with his out-of-the-box input, results in eye-pleasing designs that are sure to be conversation pieces.
2.7
Score
Popularity
Activity
Freshness
Get Trend Hunter Dashboard