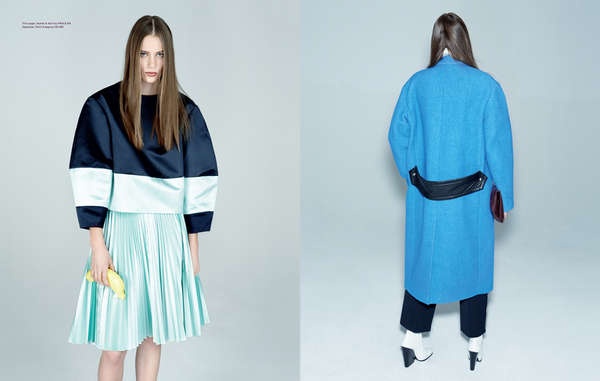 Sleek by Roman Goebel is Minimalist and Sophisticated

Meghan Young — June 18, 2013 — Fashion
References: romangoebel & trendland
Share on Facebook Share on Twitter Share on LinkedIn Share on Pinterest
There is a subtle quirkiness to the photo series titled Sleek by Roman Goebel, a photographer based in Berlin, Germany, that will enamor people immediately. Although the model is utterly chic in sophisticated pieces pulled from the racks of such labels as Celine, Prada, Felipe Oliveira Baptista and more, she is given an approachable vibe that is slightly reminiscent of Gwyneth Paltrow's Margot Tenenbaum in 'The Royal Tenenbaums.'

The looks showcased throughout Sleek by Roman Goebel were put together by stylist Christian Stemmler. Since the elegant ensembles are enough to reel people in, Goebel relied on little else. Shot in studio, there is the occasional banana or cacti prop. Mainly, it is the model's slouched poses and stoic expressions that adds that je ne sais quoi quality to the photoshoot.
3.9
Score
Popularity
Activity
Freshness
Get the 2021 Trend Report FREE