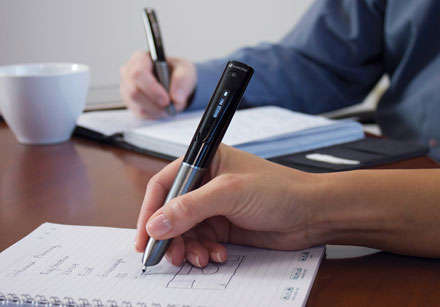 The Sky WiFi Smartpen Automatically Sends Recordings to the Cloud

Meghan Young — November 1, 2012 — Tech
References: livescribe & dvice
Share on Facebook Share on Twitter Share on LinkedIn Share on Pinterest
Pens and pencils are slowly becoming obsolete not only because of the accessibility of computers, smartphones and tablets, but also because of other devices like the Sky WiFi Smartpen. Although it looks and feels just like a typical writing tool, it is far from typical. Similar to its predecessors, Echo and Pulse, the Sky WiFi Smartpen digitally records what people write, hear and say. Unlike those two, this device now automatically sends those recordings to Evernote account for archiving wirelessly. Evernote can be accessed anytime, anywhere.

Created by Livescribe, the Sky WiFi Smartpen is available in 2GB, 4GB, and 8GB versions with a capability of holding up to 800 hours of audio while Evernote accounts include 500MB of additional upload capacity for smartpen notes and audio. It recharges using a micro-USB connection.