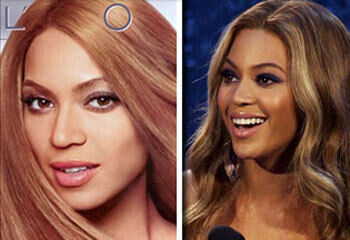 In the two-page L'Oreal ad, Beyonce's wind-swept hair is a reddish blond shade with highlights. A box of Feria in the ad features a white woman with a similar hair colour.

The ad created a stir after it was pointed out in a post by celebrity gossip website TMZ, which showed side-by-side photos comparing the ad with a photo of Beyonce with noticeably darker skin. It was the site's most commented on post Thursday afternoon.

L'Oreal, the maker of Garnier hair care and Lancome cosmetics and the the world's largest cosmetics maker, has issued a fervent denial. "We highly value our relationship with Ms Knowles. It is categorically untrue that L'Oreal Paris altered Ms Knowles' features or skin tone in the campaign for Feria hair colour," the Paris-based company said in a statement.

A representative for Beyonce said the singer would have no comment beyond L'Oreal's statement.