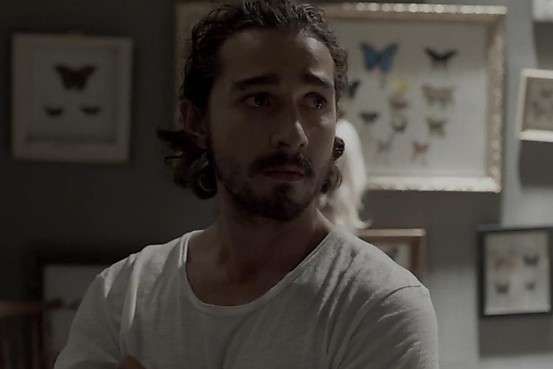 Diana Duong — June 19, 2012 — Naughty
References: youtube
Share on Facebook Share on Twitter Share on LinkedIn Share on Pinterest
Though it features Shia Labeouf, the Sigur Rós 'Fjögur Píanó' video is definitely not another Transformers sequel and is certainly not a Disney Channel Original Movie. The Sigur Rós music video for Fjögur Píanó, directed by Alma Har’el, seems to carry more of a dreamlike quality than an actual story.

One could say the dreamlike aspect of the video came from the LSD lollipops that appeared halfway through the music video, but was probably already confused way before Shia LaBeouf and actress Denna Thomsen began licking the glowing candy.

LaBeouf and Thomsen play a couple possibly disturbed by a drug addiction. The video starts with the couple dancing naked in their room (it should be mentioned that the cameo of Shia LaBeouf makes this video very NSFW). It slowly spirals into destruction as Shia begins to trash the room and scar his lover.

He feels guilty about the dead butterflies that used to line their bedroom walls, and he begins to weep. The couple are enticed by glowing candy and fall deeper into dream world. It seems like a vicious cycle.

A part of the Mystery Film Experiment, Sigur Rós recently asked a dozen filmmakers to choose a song from his album and create “whatever comes into their head when they listen to songs.”