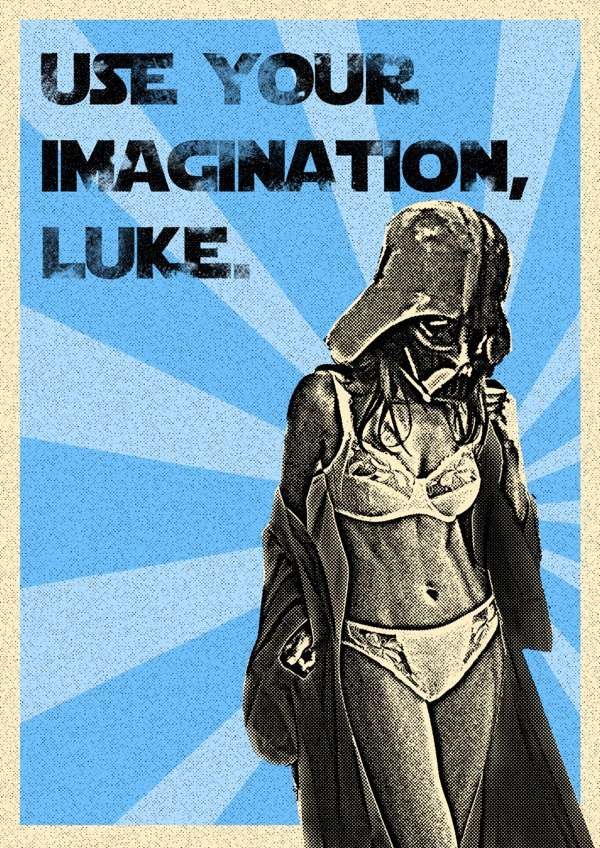 Jason Soy — February 14, 2012 — Pop Culture
References: blankart.tumblr & blog.thaeger
Share on Facebook Share on Twitter Share on LinkedIn Share on Pinterest
Star Wars fans have never seen Darth Vader, Yoda, Chewbacca and Stormtroopers as they look in these Shaun Stehly posters. It takes a special kind of person to imagine the completely non-sexual male characters as titillating sci-fi pin-ups, and Stehly is that special someone. Using grainy images of the George Lucas characters and transplanting their heads onto scantily clad bodies of females, Stehly has produced some unexpected fan art that’s highly provocative in its absurdity.

But perhaps that’s the point Shaun Stehly is trying to demonstrate. Appearing on three of the vibrantly colored posters are the words, “use your imagination.” Though Stehly’s creations are highly unorthodox, no one can fault him for not thinking outside-the-box. The images thus serve as inspiration for viewers to push the limits of their creativity in a manner similar to Stehly, as well as the Star Wars films.
4.3
Score
Popularity
Activity
Freshness
View Innovation Webinars