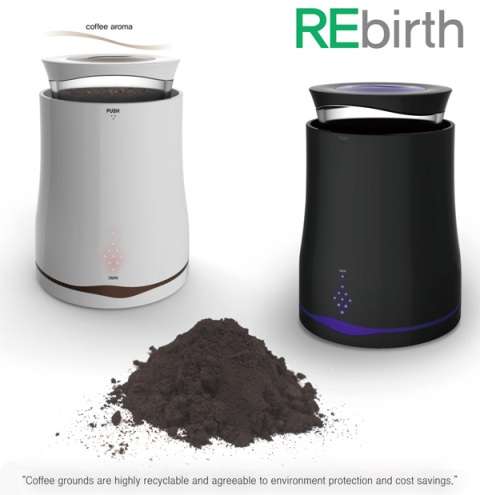 Michael Hines — September 7, 2011 — Art & Design
References: yankodesign
I had no idea that coffee grounds could be reused until I saw Seul-gi Kim's REbirth. REbirth is a gadget designed to dry out wet coffee grounds. REbirth works simply, using a fan to dry up the wet grounds inside.

You may not know this, but used coffee grounds can apparently be used in a variety of tasks. Dried up grounds can be used for cleaning, as air fresheners, as fertilizer and as beauty aids.
REbirth would be a perfect companion piece to the modern coffee maker. It is difficult to imagine the amount of wet coffee grounds that are going to waste around the world. A simple device like REbirth would allow consumers to get the most out of their coffee and would actually end up saving people money in the long run. Beauty aids and air fresheners aren't cheap after all.
1.9
Score
Popularity
Activity
Freshness