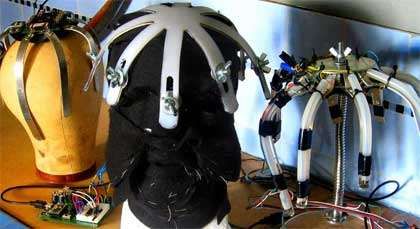 Jeremy Gutsche — October 18, 2006 — Tech
References: eddostern & we-make-money-not-art
Share on Facebook Share on Twitter Share on LinkedIn Share on Pinterest
Imagine a video game without the video. Sensory Deprivation computer games push the boundaries of entertainment by creating one on one opponent computer games where the players interact by responding to non-visual cues (think vibrations). The two opponents guide their players around and each movement is projected for an audience against a gallery wall. In an interview with Thomas Beard, the author described, "I'm interested in making it a game that blind people and seeing people, for instance, could play together, a game where the abilities of the blind person would become a benefit in the game. The game is going to evolve into a 3D game using Torque, which is the same engine we used in Waco, and I'm also going to play around with having the players fluctuate between deprivation and full sensory overload, bombarded by too much information. So for example having them process mental puzzles or challenges or quizzes while performing with hand-eye coordination."
3.2
Score
Popularity
Activity
Freshness
View Innovation Webinars