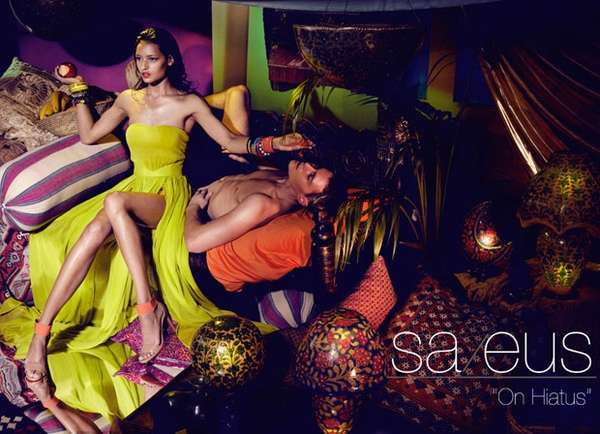 The Saveus On Haitus Campaign Boasts a Rich and Exotic Aesthetic

Meghan Young — August 30, 2012 — Fashion
References: saveus.au & fashionising
Share on Facebook Share on Twitter Share on LinkedIn Share on Pinterest
The Saveus On Haitus campaign is rich and exotic. This is only natural since it was inspired by the Moroccan lifestyle. Shot for the brand's spring and summer 2012/13 collection, the ad campaign is full of bright colors, lush decor and darkened spaces. At once mysterious and inviting, the images will inspire women to embrace their luxurious languid sides while they still can.

Captured by photographer Shxpir Huang, the Saveus On Haitus campaign was art directed by Jarred Baker, who also designed the set. With creative direction and styling by Karima Hazim, who was assisted by Annabelle van Amerongen, the models are made to appear like Moroccan royalty as they lounge on patterned pillows with man slaves scattered around them. The looks were completed by hairstylist Krystal Lee and makeup artist Jessica Chapman.
4
Score
Popularity
Activity
Freshness
View Innovation Webinars