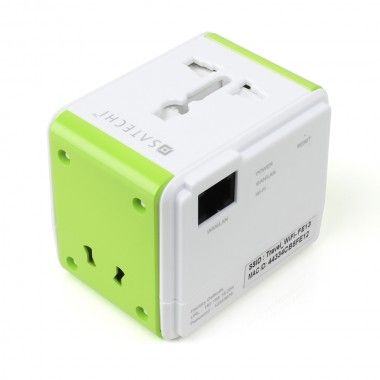 Rahul Kalvapalle — March 31, 2014 — Tech
References: satechi.net & techglimpse
Share on Facebook Share on Twitter Share on LinkedIn Share on Pinterest
The Satechi Smart Travel Router is a travel adapter with the added function of worldwide versatility. The adapter can fit into the four most commonly used plug configurations, meaning it can be used in over 150 countries around the globe. It can be used to charge phones, laptops, tablets, music players, cameras, game consoles and a range of other devices anywhere in the world.

What really makes the Satechi Smart Travel Router an eye-catching device is its router function, which works in four different networking modes. It can work as a regular router by connecting to the Internet and broadcasting a wireless signal, or it can work as a 'repeater' or network range amplifier. Additionally, it can function as an access point that uses your wired Internet source to create a wireless connection. Finally, it can connect to a Smart TV or a video game console via an Ethernet cable.