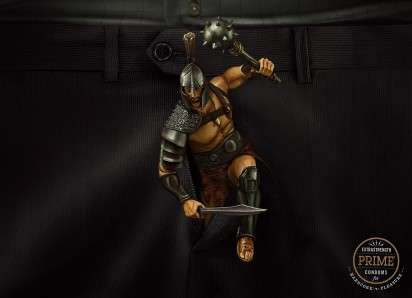 Jordy E — April 1, 2012 — Marketing
References: tbwa & ibelieveinadv
Share on Facebook Share on Twitter Share on LinkedIn Share on Pinterest
The Buenos Aires TBWA marketing division has partnered up with Prime Condoms to produce their 'Samurai, Viking, Gladiator' publicity series. A modern take on safe sex advertising, the campaign boasts some iconic fighter characters known to decimate battle fields. This time however, the figures are fighting off contraception, a clever twist of events that will surely pique the attention of buyers.

Produced by Creative Director Roberto Leston, the in-your-face Samurai, Viking, Gladiator collection is dark, aggressive and humorous, otherwise known as an epic combination for any marketing program. In contrast to the majority of condom ads which play up on overtly sexual themes, Prime Condoms has managed to explore the action figure and folklore realms, areas which are typically quite frigid. Based on the evident success of the Samurai, Viking, Gladiator stream, more unpredictable twists will likely come from the Prime Condoms team in the future.