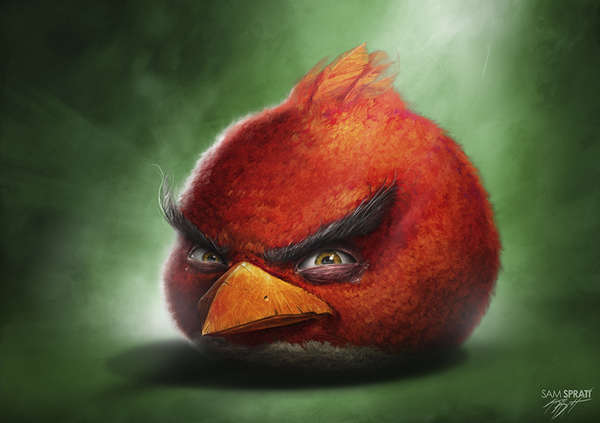 Jason Soy — September 1, 2012 — Tech
References: samspratt.tumblr & rampagedreality
Share on Facebook Share on Twitter Share on LinkedIn Share on Pinterest
If you’re familiar with the works of Sam Spratt, you’ll know he is a master of rendering stylized yet realistic digital images that are redefining modern painting. Taking a break from illustrating the likes of Kanye West, Ron Swanson and Dwight Schrute, Spratt has painted the iconic creatures found within the ever popular Angry Birds app. The results, as you can see for yourself, are eerie yet awesome.

Most notable about these Sam Spratt Angry Birds paintings are the various textures found on the birds and pigs. Fluffy feathers engulf each avian while their beaks are depicted as rigid and battle-worn, probably a symptom of crashing through various structures. For added aesthetic flair, each of the characters also have emotive and bushy eyebrows similar to the kind seen on kung fu masters in old Hong Kong films.