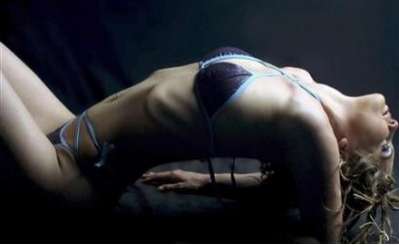 mediterranean — May 24, 2008 — Naughty
References: news.yahoo & telegraph
Share on Facebook Share on Twitter Share on LinkedIn Share on Pinterest
What better way to swim with the fishes than using their skin to make bikinis? Leave it to Chilean fashion designer Claudia Escobar to transform cheap raw material such as the masses of Scottish Salmon skin discarded every year into a line of expensive luxury clothing. It’s almost like alchemy, taking waste and making it into something highly coveted.

Having spent four years researching and developing the project with the help of specialist laboratories and tanners in Uruguay and Chile, Escobar describes the Salmon skin as “very durable, versatile skin. It is anti-scratch, anti-tear, very lightweight and even if you’re swimming, you can come out of the water and it won’t sag because it has a lot of natural elastic. It suits the salmon and it suits humans.”

And the designs do not come cheap! Escobar’s Lycra-trimmed, ultra-mini salmon-skin bikini sells for almost £250, Sandals for £90, mini-skirts for £120 and jeans with ‘tail end’ hems, for about £700. However, in a surprisingly good-natured gesture, with almost zero overhead, workers receive half the sale value according to the designer who sees fashion as a tool to help women overcome poverty by transforming local traditional materials into pricey luxury items.

Escobar, who came to Scotland four years ago says, “Many people who lived near rivers and oceans have used fish throughout history. It’s not my original idea. It’s amazing, it’s a used product and you transform it into a product with added value.”

This isn’t the first time we’ve seen fish scale swimwear on Trend Hunter, in fact we featured a bikini made of tilapia skins before…