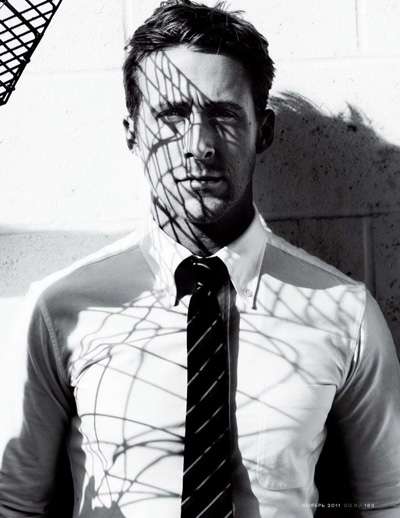 Katherinev123 — October 22, 2011 — Fashion
References: gq.ru_ & designscene.net
Share on Facebook Share on Twitter Share on LinkedIn Share on Pinterest
The Ryan Gosling GQ Russia feature is all about my favorite Canadian actor (and yours too, I'm sure). Gosling, the star of the recent films Drive and The Ides of March, appears both on the cover and in an editorial for the magazine's November 2011 issue. Not one to disappoint, Gosling looks as smoldering as always while he models with shadows.

Yes, shadows. But who really cares what the premise is -- it's Ryan Gosling, and that's all any photo shoot really needs. This spread was also photographed by famed fashion photographer Mario Testino, so as far as fashion shoots with male celebs go, it really doesn't get any better than this.

In terms of fashion, the Ryan Gosling GQ Russia spread features a series of polished suits, including a pinstriped one -- which Gosling wears for the cover -- and a sleek wool version accompanied by a fedora.
4
Score
Popularity
Activity
Freshness
Jeremy Gutsche Keynote Speaker