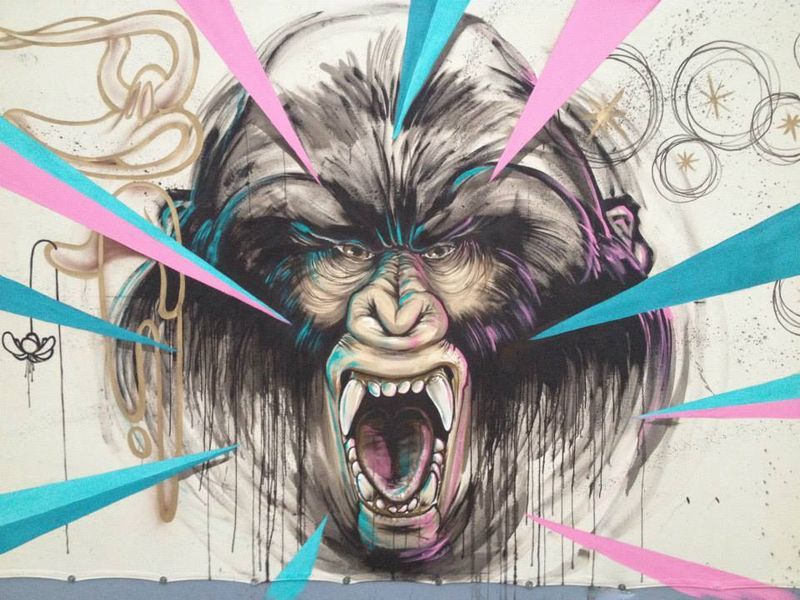 Ruben Ubiera is a Miami-based urban pop artist whose work is inspired by the city streets and the hubbub of people interacting with their surroundings. A true master of his craft, his paintings feature vibrant colors, eye-catching contrasts and creative use of materials. They offer spirited social commentary on the lives, joys and tribulations of people in the city.

Ubiera tends to abstain from traditional canvases, choosing instead to paint on everything from fences to boxes to skateboards. Much of his work lives on the walls and streets of Miami, the city that serves as his playground and muse. The bustling metropolis and its people are the inspiration as well as the beneficiaries of his unique brand of pop-surrealist urban art.

His work has also gained him acclaim beyond the streets. One of his paintings adorns the mansion of former NBA superstar Alonzo Mourning; others are displayed at the American Embassy in distant Sierra Leone.

But Ubiera is ultimately a street artist at heart. This is best embodied by his method of staying close to his subjects – skateboarding. An avid skateboarder, he uses his deck and four wheels to explore urban jungles and deserts, capture the pulse of the streets and absorb urban manifestations of pop culture. Rather than isolate himself in a studio, he prefers to immerse himself in his surroundings and in interactions with people.

In fact, many of his pieces are based on ideas picked up during skateboarding expeditions. For his SkateboArt series for example, he captured a photograph of a desolate highway intersection – while out on a skateboard ride – and proceeded to hand-paint the photographic images on six skate decks.

His love for both the playful and gritty aspects of skateboard culture is also evident in his other works, many of which bear deliberate paint drips and graffiti-like elements. Rather than be overly precise, Ubiera consciously lets his pieces embrace and celebrate the imperfections of the city and its people.

His art pays special attention to Latino American themes. After all, he was born in the Dominican Republic, and that’s where he received his early grounding in the arts at the hands of his artist uncle. He then immigrated to the Bronx in New York with his family at age 15. The graffiti and street art that he was exposed to at that impressionable age still influences his art today, more than two decades later.

Artist, skateboarder and proud Latino in no particular order, the different aspects of Ruben Ubiera’s identity mesh with each other at will, giving everything he does a rich and honest feel.

In collaboration with Modelo Especial, Trend Hunter is looking for the next great craftsmen to feature in this series. Do you know someone who embodies the craftsmen spirit? Tell us on Twitter who you think we should feature, and we'll select one lucky person who best represents a 'Real. Authentic. Craftsmen.'

Be sure to check out other craftsmen videos at Modelo Especial
6.9
Score
Popularity
Activity
Freshness
Get Trend Hunter Dashboard