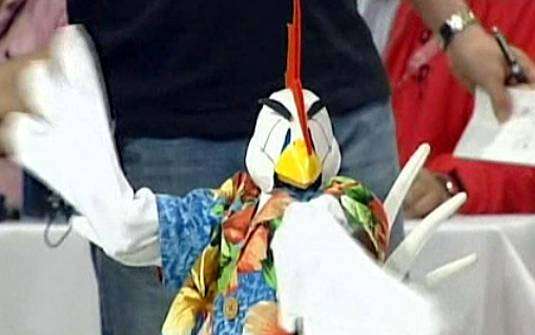 Wessley Murylo — March 26, 2008 — Lifestyle
References: reuters
Share on Facebook Share on Twitter Share on LinkedIn Share on Pinterest
One by one the fighters are introduced into the ring at the Korakuen Stadium Hall in Tokyo, accompanied by thunderous applause. But this is no normal boxing match â€“ the contenders are small humanoid robots built and controlled by hobbyists, participants in the twice-yearly â€œRobo-One Championshipsâ€.

Japan 'houses' 40% of all the robots in the world creating a fertile ground for amateur programmers, investing time and money in the designing and building of robots from in the market available components out of server motors, cameras, sensors and wires.

Last week more than 112 small remote controlled robots stepped into the ring to contest the championship. The competition shows a wide variety of warrior robots in all sizes and shapes. One is designed as Karate fighter, the other as a medieval prince or even as a fighting cock. By the end of the final day, 45 remained standing among the heavyweights (more than 3 kg) and featherweights (less than 3 kg).

Naoki Maru, a 41 year engineer and winner of the heavy-weights category this year, believes that the reluctance of the large companies to invest in the development of robots opens an opportunity to the hobbyists. â€œMany an advanced technology emerges during this type of disputing between robots. Take this competition, it is organised twice a year and in every edition an unbelievable revolution in robotics can been seen.â€

In the featherweight category, â€œAutomo03-Sandanâ€ â€“ a robot dressed in karate gear â€“ was no match for â€œLeghornâ€, a fighting cock known for its vicious Chicken Chop martial art moves. But in that category it was finally the South Korean robot Teakwon-V which crushed his opponents with fast punches, delighting his creator, Jeon Young Sun, who won the one million Yen premium (USD 10 mil) for that category. "It was a nice opportunity to see the Japanese robotic technology nearby.â€ said Jeon to Reuters.

In the final Maru's fighting robot "King Kaiser", winner of the heavy weight category, operated by his sons Kenta and Ryouma, defeated the winner of the feather weight Jeon's "Teakwon-V", and won the All Class title in which lightweights combat against heavyweights.