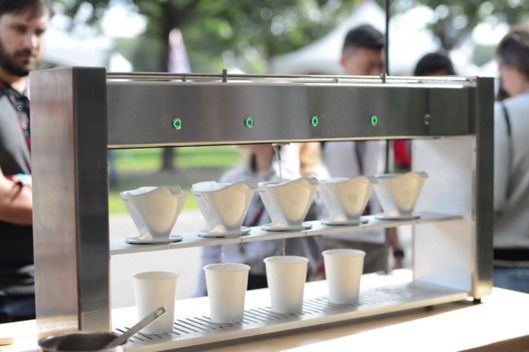 Katherine Pendrill — December 16, 2015 — Tech
References: poursteady & grubstreet
Share on Facebook Share on Twitter Share on LinkedIn Share on Pinterest
Chelsea's 'Café Grumpy' now features a robotic coffee brewer that can make drinks for up to five customers at a time. While many people believe that a pour-over is a superior brew, it can take a little longer than ordering coffee brewed in a pot. However, this robotic machine could speed up the brewing process by doing the work of five baristas at once.

The 'Poursteady' is a robotic coffee brewer found at the Café Grumpy location in Chelsea. The machine was built by engineer Stephan von Muehle, who also spent time working on robotic parts for the Mars rover. von Muehle's latest creation is a robotic coffee machine that can brew five pour-overs at once. This feat is accomplished through the use of computer-controlled nozzles that release the perfect amount of water into the cones of coffee sitting below. The water is adjustable via an accompanying app, meaning baristas can use the controls on the machine to change everything from the temperature to the drizzle pattern.

More than a dozen of the machines have now been produced, meaning cranky coffee drinkers may be able to get their favorite brew faster than ever before.
5.6
Score
Popularity
Activity
Freshness
Jeremy Gutsche Keynote Speaker