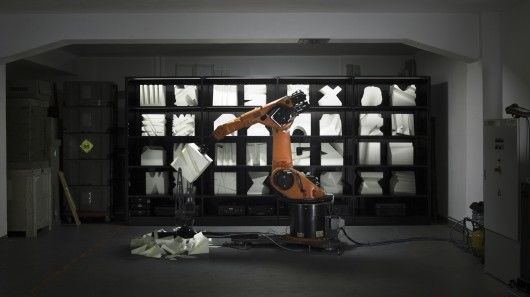 Rahul Kalvapalle — February 11, 2015 — Tech
References: robochop & gizmag
Share on Facebook Share on Twitter Share on LinkedIn Share on Pinterest
Robochop is an awesomely-named installation that consists of four foam-carving robots that can be controlled by anyone over the Internet. The robot will enable you to design and build something which you then get to keep. It will be presented by Germany's GFT Group at the CeBIT computer expo in Hannover, as part of a series of demonstrations of the Internet of Things.

Each of the four robots will have access to a grand total of 2,000 polystyrene blocks, each measuring 50 cm per side. Beginning March 5th, people around the world will be able to use the Robochop app to design 3D objects such as abstract sculptures, pieces of furniture or anything else. Between March 16th and 20th, the robots will make some of the objects and send the finished creations to the designers.

Robochop looks to be a precursor to a future where consumers will be able to leverage the Internet of Things to directly access industrial equipment to build things to their specifications.
3.8
Score
Popularity
Activity
Freshness
View Innovation Webinars