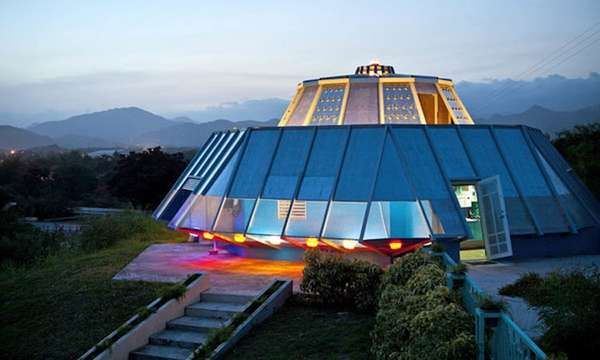 Meghan Young — September 27, 2012 — Art & Design
References: nytimes & mymodernmet
Share on Facebook Share on Twitter Share on LinkedIn Share on Pinterest
There are unique and strange homes and then there is Roberto Sanchez Rivera's home. The retired industrial arts teacher bought land back in 2002 for $95,000 and since then has built a spectacular spaceship of a house for $150,000. Completely custom-made, his circular house resembles a UFO.

Since it has been constructed in Puerto Rico, it is only appropriate that Roberto Sanchez Rivera's soundtrack blaring outside of the house (yes, there is a soundtrack) alternates between the theme music from Close Encounters of the Third Kind and salsa. Comprised of three bedrooms and two bathrooms, the interior of Roberto Sanchez Rivera also scream sci-fi.

According to My Modern Met, the motivation behind Roberto Sanchez Rivera's house "is a 40-year-old heartbreak from Rivera's teen years that set this goal of creating a home atop a hill so magnificent that the girl who broke his heart would have no choice but to notice and return to him."
5.1
Score
Popularity
Activity
Freshness
Get Trend Hunter Dashboard