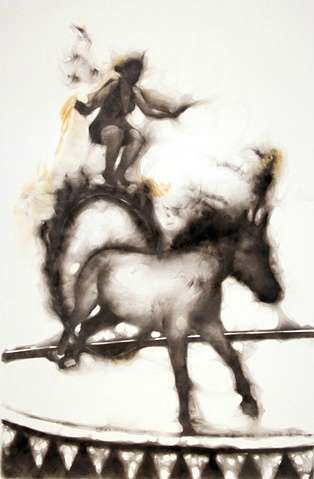 Meghan Young — January 18, 2012 — Unique
References: robtarbell & mymodernmet
Share on Facebook Share on Twitter Share on LinkedIn Share on Pinterest
Rob Tarbell's artwork could easily be mistaken for monochromatic watercolor paintings. Blotchy and transparent, it is understandable why this would be the case. Rob Tarbell doesn't work with watercolor, however. Instead, he works with a medium that is much more unique and captivating: smoke.

Essentially, Rob Tarbell secures pieces of paper onto the ceiling of his studio and then burns everyday objects to create the smoke that leaves purposeful marks above. Rob Tarbell's 'Smoke Rings' series is particularly arresting. It centers around circus images that revolve around horses, elephants and zebras.

As though capturing ghosts from a distant past, Rob Tarbell's work is hauntingly beautiful. He says, "The trainer must recognize and respect the innate nature of an animal when trying to modify its behavior to achieve a desired outcome [...]. The same is true in working with smoke."
3.2
Score
Popularity
Activity
Freshness
Jeremy Gutsche Keynote Speaker