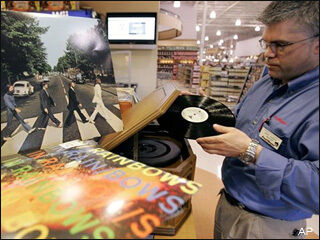 Going Like Sixty — June 13, 2008 — Business
References: bakersfieldnow
It's hard to believe, but vinyl records are making a comeback, at the same time that CD sales are on the decline.

In fact, one major grocery store chain, Fred Meyer, still has LP (Long Playing - usually 33 1/3 revolutions per minute) for sale at the store. Fred Meyer, owned by Kroger, is testing the concept of keeping vinyl alive.

Implications - The Recording Industry Association of America claims that shipments of LPs have grown 36 percent between 2006 and 2007. This is a huge rise considering the fact that CD sales have dropped more than 17 percent in the same time period. It seems strange that technology would be moving backwards instead of forwards!
1.8
Score
Popularity
Activity
Freshness