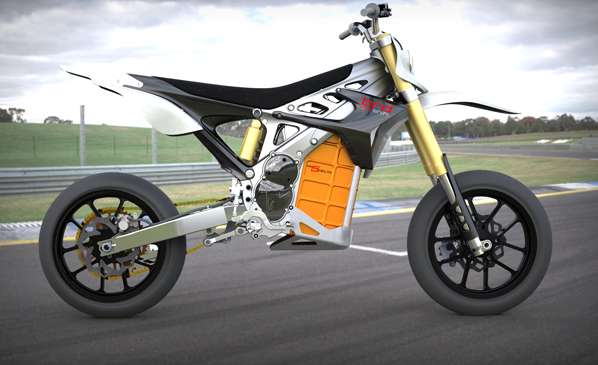 Jordan Sowunmi — August 9, 2011 — Autos
References: faster-faster & gizmag
On the official BRD Motorsports website, they describe their electric motorcycle (entitled the RedShift) and their company as "The Future of fast," and looking through the particulars on the two versions of the RedShift vehicle, that exclamation is no exaggeration.

The RedShift motorcycles are scheduled to be released in 2012 and come in two distinct formats, the "dual-sport" and "urban," both expected to be as powerful as any gas-powered 250cc 4-stroke vehicle.

The RedShift motorcycles are being developed by BRD Motorsports, a team of racers, designers, engineers, and mechanics who build motorcycles with an emphasis on speed and style. The company released shots of the RedShift SM earlier this week in San Francisco. The RedShift MX is being developed at the same time and is expected to be unveiled sometime in the coming months. Both RedShift vehicles are expected to weigh about 250 pounds, and has a target power of 50 hp 5kW battery capacity.

The RedShift vehicles are rumored to be priced around $15,000 USD. BRD Motorsports plans on releasing more information about the RedShift in November 2011.

Implications - One of the most effective ways a company can establish itself as one focused on innovation is by investing in environmentally friendly products and services. By appearing as one of the companies on the forefront of eco-friendly product development, the company shows a commitment to ingenuity and a willingness to think outside of the box.
5.2
Score
Popularity
Activity
Freshness