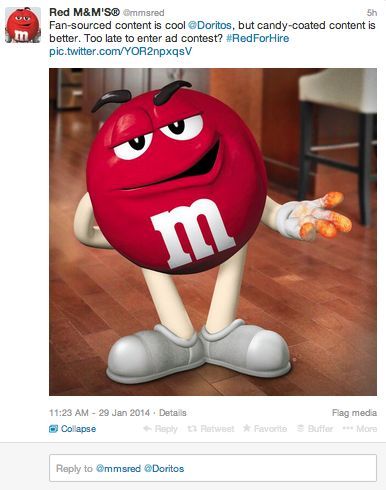 Laura McQuarrie — January 30, 2014 — Marketing
References: indeed & twitter
Share on Facebook Share on Twitter Share on LinkedIn Share on Pinterest
The Red M&M candy has been the "spokescandy" for M&M’s at both the 2012 and 2013 Super Bowls, but not this year — the 2014 M&M’s Super Bowl commercial is set to star Yellow instead. But Red is a go-getter and he doesn’t want to sit out on the sidelines, so he’s taking the initiative to find himself a spot in another brand’s Big Game commercial. To spread the word about his availability, Red created a resume that highlights his impressive accomplishments as an "Actor Extraordinaire," plus some of his skills, like being "irresistible to all."

Red’s resume also links to his Twitter account, where he interacts with brands with upcoming Super Bowl ad spots, like boasting that he could do a perfect accent and totally blend in with the British actors that will star in Jaguar’s commercial. Shamelessly, Red is promoting himself with the "RedForHire" hashtag.

The stunt is a playful way for M&M’s to put its spin on the Super Bowl 2014 commercials and interact with other brands to drive up hype. The Red M&M engaged Kia in a humorous Twitter conversation, where Kia fretted about the chocolate candy sitting on its seats, but this response was wittily trumped by Red, saying: "melts in your mouth, not on your seats."
6.2
Score
Popularity
Activity
Freshness
Get the 2023 Trend Report FREE