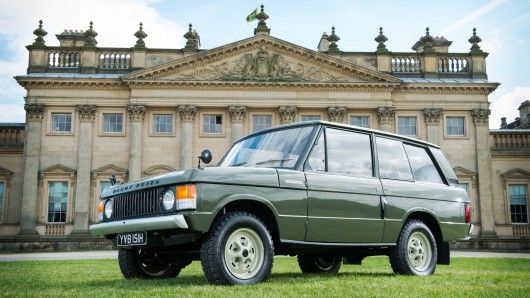 Rahul Kalvapalle — September 10, 2014 — Autos
References: silverstoneauctions & gizmag
The first Range Rover to roll off the production line -- Range Rover 001 -- sold at auction for $213,000. The fully-restored 4x4 fitted with chassis no. 001 was sold in London by Silverstone Auctions and Salon Prive to a private buyer.

Range Rover 001 was part of the first batch of six Land Rovers given secretive number lates to hide them from prying eyes while a new model was being road-tested. When the vehicle was sold to film producer Michael Forlong in 1971, it was resprayed from its original Olive Green to Bahama Gold, fitted with a texture dash and re-sold. Its number plate was then changed, and was changed again after being sold to a Kent farmer.

The rediscovery of Range Rover 001 was then followed by a six-year restoration process during which the vehicle was repainted in ots original color. The owner who bought the vehicle persuaded the Driver and Vehicle Licensing Agency to reissue its original license plate due to its historical significance.
5.4
Score
Popularity
Activity
Freshness