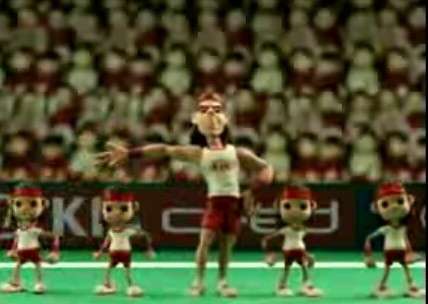 Rafael Nadal vs. Alien for Kia

lourdes sanchez bayas — May 24, 2008 — Autos
References: lunaticadesnuda.blogspot
Share on Facebook Share on Twitter Share on LinkedIn Share on Pinterest
Last year, Kia Motors signed tennis superstar Rafael Nadal to be the company's celebrity spokesperson in Europe. Titled â€œNadal vs. Alienâ€, the web-only video is part of Kia's new marketing campaign. The short video begins with a cartooned Nadal playing tennis against an alien who all of a sudden sprouts multiple arms and starts pummeling Rafael with tennis balls. Nadal eventually recovers, does a strange dance with a bunch of Nadal clones, changes into a transformer-like superhero (I guess they know superheroes are in fashion) and comes back to beat the crap out of the alien in a soccer face-off. What? Exactly my sentiments. At the end of the commercial, Nadal turns into a car and drives off.