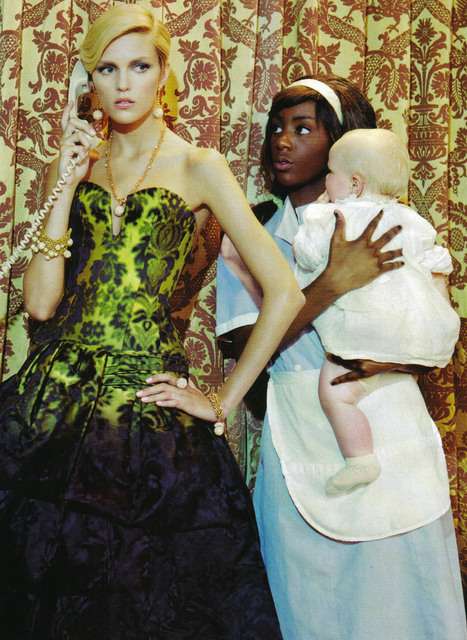 Vogue Italia Stereotypes a Black Woman as a Maid

Shot by Miles Aldridge and starring the beautiful Anja Rubik, the “The Vagaries of Fashion” editorial is set in the 1950s/60s and introduces us to a wealthy and fashionable but painfully apathetic white socialite with cherubic albino children that she hardly pays attention to lest they cramp her style, and a black maid that only appears in one of the photos.

Don’t get me wrong now. I love the exquisitely gorgeous retro-glam wardrobe on Anja even though I don’t particularly care much for the dark yellow background Aldridge chose.

But my questions still remain: What was Aldridge going for here? Is the editorial some kind of social commentary on the socioeconomic disparity between the races? Why is that black maid there amid people with exceedingly white complexions? Why was that contrast necessary?

Maybe “The Vagaries of Fashion” was not meant to be offensive but the fact remains that to many people, it is.

My point here is that there is not great diversity in the fashion world aside from Naomi, Jourdan Dunn, Chanel Iman, Liya Kebede, and a few others. So when a black person is stuck in the background of a set to act as wallpaper or even worse, to play a subservient role, that, in my opinion, smacks of racism.